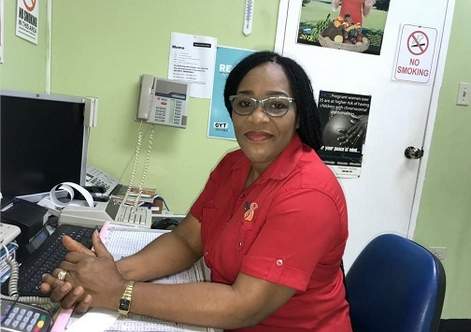 KINGSTON, Jamaica — For the last 35 years, Jamaica’s Top Female Blood Donor, Sonya Binns Lawrence, has been serving the nation in her own way, by donating blood three times per year.

To date, after starting to give blood in July 1983, she has donated 100 times, which would have already saved approximately 300 lives, given that each donation accounts for three pints, which can save three lives.

“Giving blood is my way of being a hero and giving back to Jamaica. I can’t fly as the super heroes in movies do or jump off buildings, but I can help to save lives through blood donations, and I have taken pride in doing so over the years,” Binns Lawrence told JIS News in an interview.

“Another way in which I can save lives is by encouraging others to donate blood as well. It’s a simple procedure. It may seem painful by just observing someone giving blood, but it is easy, and you do not know when you or one of your loved ones will need blood. By giving blood, you build a record with the National Blood Transfusion Service. So, just in case the unfortunate happens and you need it, you can have easy access to blood,” she added.

Binns Lawrence was first inspired to donate blood at age 17 years, when her pregnant sister needed blood, and although she was one year shy of the required age, she was resolute to play her part to save her sibling.

She emphasised that saving lives is something she takes personally, and it is for that reason, on Heroes Day, October 15, she along with The National Blood Transfusion Service and volunteers from the Rotaract Club of St Andrew, hosted a blood drive at her place of worship, Kencot Seventh-day Adventist Church, located along Osbourne Road in St Andrew, where she made her 100th blood donation.

Binns Lawrence was specially recognised by the church for her years of donating blood on Saturday, October 13.

“I see myself as a hero, so on Heroes Day, I donated blood. I hope to make this an annual event that persons look forward to and prepare themselves for,” Binns-Lawrence said.

“Blood was meant to circulate, and it takes only 15 to 20 minutes, and one pint can save three lives,” she added.

On World Blood Donor Day on June 14, 2013, the Ministry of Health, the National Blood Transfusion Service, Pan American Health Organization, and the World Health Organization honoured Binns-Lawrence as the Island’s Top Voluntary Blood Donor during a ceremony at the Emancipation Park in St Andrew, where she also made her 80th blood donation.

“I felt really humbled when I got that recognition,” she says.

“Mrs Binns Lawrence is a humanitarian and at all times tries to give back to her community. Giving 100 units means she has managed to save safely 300 lives and that in itself is a huge accomplishment. Of noteworthy importance is the fact that she is the only female blood donor in the nation to have achieved this tremendous feat,” Pinnock told JIS News.

“The National Blood Transfusion Service wishes to celebrate her and show the nation a shining example of true passion, dedication and commitment,” she added.

For Jamaicans who will take on the mantle of donating blood, Mrs. Binns Lawrence has some simple tips to share of what persons should do and not do before donating blood.