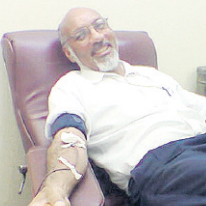 Like most persons, I was afraid of injection needles and the sight of blood when growing up as a child and into early adulthood The thought of becoming a blood donor was, therefore, the farthest thing from my mind as I entered into adulthood

Approximately forty years ago while I was a student at the United Theological College of the West Indies, something happened that changed my approach to blood donation, though not changing significantly my perspective on the needles and the sight of blood at the time The student body decided, as an outreach project, to invite the Blood Bank to the campus and to solicit donations from the students and the staff I was moved by the presentation of the representative of the Blood Bank who spoke on the way in which the blood that is collected is utilized in life-enhancing and life-saving ways By that time I had had to face the critical illness and death of relatives and persons closed to me who would have benefited from the donations of others.

With some trepidation I entered the mobile unit and took my seat in the donor chair with eyes closed, muscles tense, while awaiting the painful puncture from the needle, even as I closed out the sight of the blood that would flow With the soothing presence of the attending staff member, I soon realized that all of the anticipated pain and trauma were in my imagination Before I knew it, I had given my first unit and was telling others how painless is the process.

Over the following decades I have come to see the donation of my blood as the sharing of something very personal and intimate, characterized by Holy Scripture as “life”, as part of my contribution to the wellbeing and health of those whose very existence may be dependent on the blood which I am offering I have been unmoved by arguments to the effect that my blood may be given to restore the health of persons who may be criminals I have given blood in response to specific appeals by persons known to me, to persons who meet me outside the blood bank with stories of desperation for themselves or another who is facing surgery, or I simply give a donation which is treated as a donation for self I try to give blood several times each year and especially around the holiday seasons when the demand tends to be greatest This has been my policy here at home and even during the years when I studied in the United States of America, where I made my donation of blood to the American Red Cross.

To date, I have given approximately fifty units of blood and will continue to give until age or ill-health prevents me from being a donor The blood banks with which I have been associated are not the scary places which we often conjure up Indeed, it is one of the most sensitive areas of the hospital when so located, perhaps because of the mystery and mystique which the handling of this commodity which represents “life” generates I often look around the waiting area and the donation room to see the faces of the men who come to make donations and who seem so terrified perhaps because they have to give blood for their wife or partner who is shortly to deliver their baby At the end of the process the relief becomes evident as they come to realize that the fear surrounding donation is only in one’s mind.

I would urge all persons who are deemed healthy for purpose of donation to do so, not just for their family members, but as an expression of social sensitivity and concern toward those whose very life may depend on that one unit which we give.